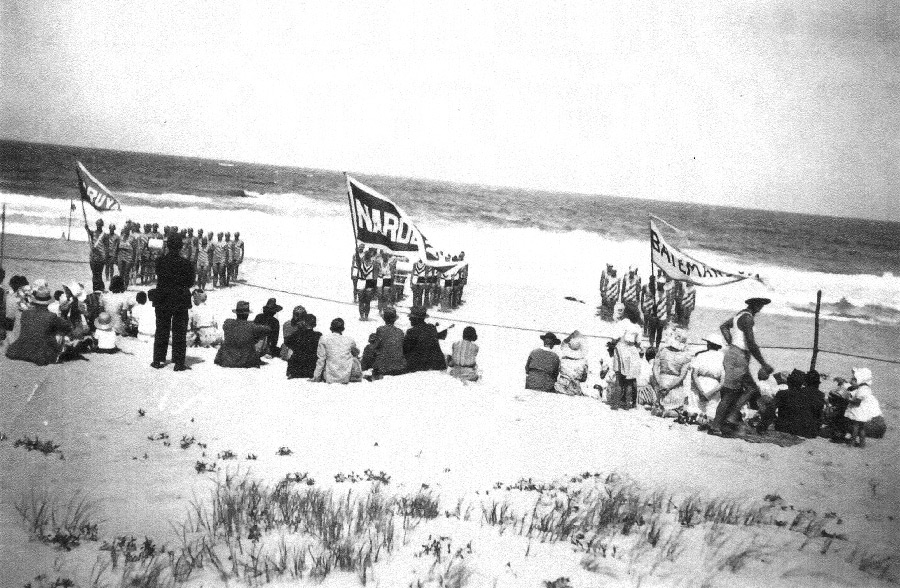 1909 The ‘Moruya Examiner’ reported on a public meeting held on 16th October 1909, where it was resolved to form a local Surf Life Saving Club and a committee was formed - that it was suggested that the Club affiliate with the Royal Life Saving Society and not the New South Wales body might later have some bearing.

The same newspaper, on 20th January 1910, reported that ‘on the Wednesday afternoon last, the occasion being the inaugural meeting of the surf club at the Island Baths, over 400 persons were in attendance'.

History would indicate that two other Branch clubs, Tathra and Pambula, were in operation before World War I.

It was, however, not until 12th February 1932, that a further Public Meeting was called ‘to discuss the formation of a surf life saving club, for the purpose of patrolling Moruya Heads ‘.

The local Postmaster, A H Weir became the first President and would later become the first Life Member.

Some five months later, on 23rd August 1932, a further ‘Public and Annual Meeting’ was convened with local dentist, Charles Keith De Saxe, then aged 66, taking over the presidency, whilst Weir became Secretary/Treasurer.

Whilst the exact date is not known, the Club did commence patrolling the South Heads beach prior to Christmas 1932, on Sundays only.

On 22nd January 1933, the Club held its first carnival, as part of the ‘Back to Moruya Week ‘, and this was deemed an ‘unregistered carnival ‘, where holding the requisite qualifications were not a requirement of competition.

In the initial stages, the Club did not have any members possessed of life saving qualifications and the then, Captain, Godfrey Maclean obtained a copy of the Association blue ‘Instruction Manual’ and commenced training members.

On 3rd October 1933, the club accepted a recommendation for location of the first club house - ‘underneath the hill, on the northern end of the beach ‘

On 11th February,1934, the Club held its first ‘registered ‘surf carnival and were even point score winners on the day - with still no qualified members.

On 6th March 1934, a meeting of the club resolved ‘that the meritorious wins of Lionel Handley during the season and in the Branch Junior Belt Race’ be recorded.

On 21st March 1934, Lionel Handley became the first Club member to be awarded the Bronze medallion - Handley had come from the northern suburbs of Sydney in 1932 or 1933, during the Great Depression, to work on a dairy farm at Kiora near Moruya, bringing with him a reputation as a swimmer.

The first clubhouse was deemed nearing completion on 6th November 1934 and members were actively seeking engine oils from car owners, to ‘paint’ the club building.

It was on 31st March 1935, after almost 3 years of instruction by the Club Captain, that the Club presented its first Bronze medallion squad for examination.

Although the Examination Report indicates Staunton and Taylor were successful, this is not supported by SLSA records on the issue of Bronze medallions.

Club Captain, Godfrey Maclean, who was the mainstay in instruction of the squad, had to wait a further two years before being recognized as an Instructor.

The Club adopted its first Constitution on 5th November 1935, the combined work of Messrs De Saxe, Maclean and Chewying, the same year construction of the first club house was actually completed.

On Australia Day, 26th January 1938, a weekday and not a patrol day, the Club was confronted by its first rescue experience; rescuers would be in position on the home beach within 15 minutes of being notified, securing the swimmer who could not be resuscitated.

On 7th November 1939, the Club appointed a Sydney lifesaver, Trevor Bennet, as Instructor/Lifesaver/Club Organiser, for the balance of the season, funded by local businesses, certainly, a novel venture by a small country Club. 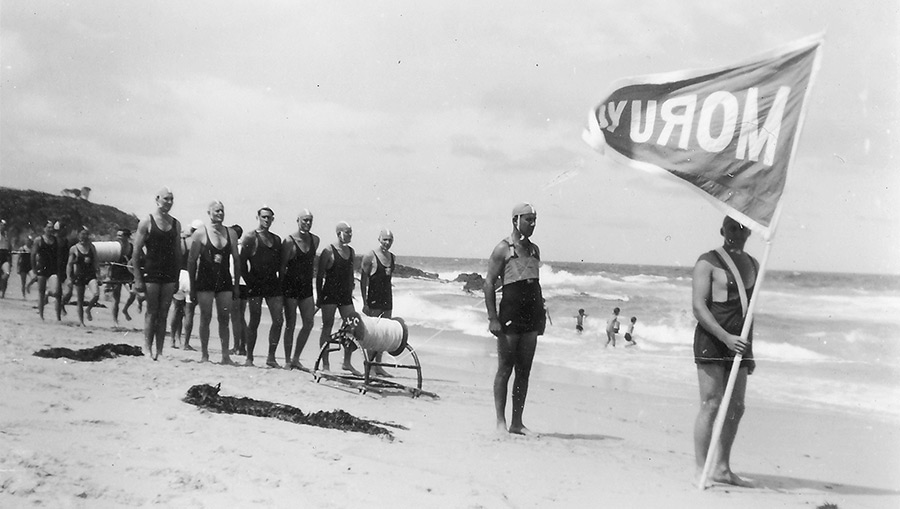 World War II saw the Club forced into recess in 1942; Garnet Chewying was then Secretary/Treasurer and it was reported ‘he grabbed all the club records and account books for safe keeping ‘.

On 25th November 1946, the Club held its first meeting in four years, Charles De Saxe was confirmed again as President with Garnet Chewying as Treasurer, a position he would hold for the next 39 years.

Joining the Club in its initial year of reformation was a young, returned serviceman, Ronald Chesher, who first became President in 1947, aged 24, the beginning of a long, and distinguished period of service to the Club, Branch, State and National bodies, and he was to receive Life membership at all those levels.

Club records 1949-1959 disappeared at some point, a loss not easily overcome.

Chesher became President again in 1951, a position he would hold until 1975.

The second club house, on the frontal dune approximately 50 metres east of the present club house, was completed in 1954, pushed along by then President, Ron Chesher and contributed to largely by members themselves, and by father and son combination, Harry Ziegler and Les Zeigler (later a Life Member), nearby residents at the time.

The Club was involved in an epic, all day, rescue off Congo on 9th November 1954, which resulted in the loss of one life.

On 25th November 1956 and with the Olympic Games under way in Melbourne, a contingent of around 15 club members journeyed to Melbourne, to take part in the International and Australian Surf Championship Carnival held at Torquay, until 2nd December 1956.

In 1962 and 1965, the Club won new surfboats in competition involving patrol efficiency and carnival participation - in the intervening years, it was to win a fully equipped reel and line and a gear trailer in similar competitions.

In 1966, Colin Chesher becomes the first club member to win a State title, taking out the Pillow Fight event: not to be outdone, David Pheeney defeated Colin in the final, to take out the 1967 State event.

It was a first for the Club when, on 23rd October 1966, the Club hosted the Annual General Meeting of Surf Life Saving, NSW.

An attempt was made on 13th September 1967, to introduce management by Committee as opposed to the general body of members but this did not eventuate.

The defeat in State titles in 1967, may have spurred Colin Chesher to greater heights and in 1968, he became the first Club member to win at National level, taking out the Pillow Fight event. 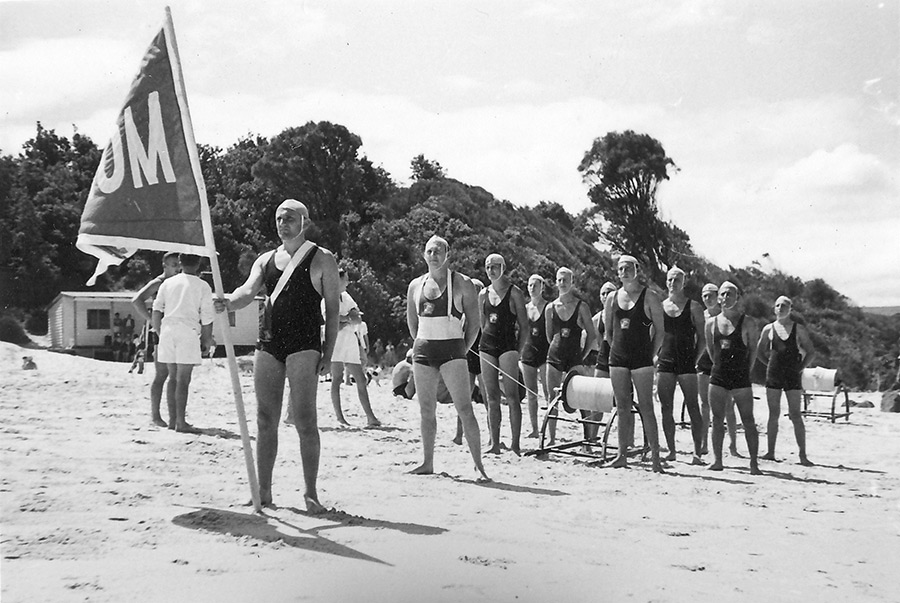 On 25th November 1973, the Club was advised that it was to receive its first Inflatable Rescue Craft, then a novelty in surf lifesaving.

In June 1974, severe cyclonic weather resulted in an over-night battle to save the club house and force a re-think of the location.

In January 1975, the Club participated in the inaugural George Bass Surfboat Marathon, finishing sixth and would go on to be one of only two clubs, to participate in all subsequent events.

After a continuous period of 24 years as President, Ron Chesher, stood down from the position at the Club’s Annual General Meeting on 25th August 1975.

On 24th May 1980, Eurobodalla Shire Council determined that it would pay an annual subsidy to all clubs within its area, to assist with club operations.

Nipper members became an accepted feature of the Club, with the Club making the determination on 2nd November 1980.

The Club was successful, on 4th January 1981, in the winning the George Bass Surf boat Marathon, for the first time, recording wins in all seven legs.

On 5th May 1981, the Club introduced management by Committee rather than by the general body of members.

Fifty years as a Club (season 1982-3) was celebrated on 18th June 1983, with a dinner at Moruya Golf Club. Life Member No.5, J N (Jack) Hill, returned to Moruya for the first time since leaving in 1940 and was formally presented with his Life Membership.

On 4th May 1984, Marco and Kay Cardinale were appointed caretakers of the Club, the duties being carried out with distinction, Marco attaining active patrol status and a subsequent Life Membership: Marco continued alone after the untimely death of Kay, establishing himself as a worthy clubman.

On 23rd June 1985, Garney Chewying handed in his abacus, having completed 39 years as Treasurer.

‘Friend of the Club’, Frank Wenzel King, long-time Moruya Heads resident, died on 8th September 1985, bequeathing his entire estate to the Club, resulting in the establishment of the Frank King Trust and, subsequently, the Frank King Futures Fund.

The Louttit family become the first to record Bronze medallions in three generations - Roley (1935), William (1960) and Craig on 20th November 1985.

On 4th January 1987, the ‘Frank King I’ IRB was christened and launched, the first tangible result of the Frank King Trust.

The Club became an incorporated entity on 17th November 1988.

Club legend, Garney Chewing, caught his last wave on 12th July 1996, his 39 years as Club Treasurer unlikely to be matched.

The Club was granted a Limited Function License on 6th October 1997.

Life membership was granted on 21st June 1998, to Myril Bunt, the first female member so honoured.

On 22nd June 2000, the Club President and the Club successfully pressed for Nipper’s to become an integral part of the Club, a long-standing requirement of SLSA.

Two club Life Members, Max Hogno and Fergus Thomson, ran the Olympic Torch on 9th September 2000 at Moruya and Central Tilba, respectively, an acknowledgement of their contribution to the surf lifesaving Movement.

On 14th November 2006, the Club and Canberra Vikings signed a Memorandum of Understanding, clearing the way for the Canberra members to compete in SLSA sanctioned events as members of the Moruya club.

Life Member, Ron Chesher, stood down on 31st July 2007, after 25 years as a Trustee of the Frank King Trust.

The Club resolves on 9th June 2009, to set up a web page as a means of communicating with its membership.

On 14th January 2010, the Club moved to establish the annual David Pheeney Memorial Scholarship which benefits a chosen Year 12 student in their final year.

The Club trialled, in February 2012, ‘Special Nippers’, an initiative of Michael and Liz Hallahan.

On October 27th of the same year, Club members President Michael Hallahan, Paul Hallahan, Tracey Pike and Wayne Foster, receive a SLSA Group Meritorious Award for the rescue of a family of three kayakers in the Moruya River mouth.

The following day the Town to Surf Fun Run was resurrected, after a lapse of 18 years.

On 9th April 2013, approval was received for the substantial renovation of the club house.

The long-awaited renovations to the Club get under way on 15th June 1913, with the BBQ area the first to suffer the demolition hammer.

The Frank King Trust amounting to $75,000, was terminated on 8th April 2014, with funds to be used for current renovations.

On 7th July 2015, family of Frank Ural Chapman, inaugural Treasurer of the Club in 1932, responded to Club initiatives, providing club with historical information and a photograph.

The Frank King Trust was formally terminated on 16th August 2015, with $45,000 being utilised as part of the Club refurbishment and $30,826,00, used to establish the Frank King Futures Fund available for IRB replacement or club house improvement.

The first female Life Member of the Club, Myril Bunt, attended Parliament House, Canberra on 2nd September 2016, and was presented with the Order of Australia, for her contribution to the community and surf lifesaving.

Seventy years of membership of the Club by Life Member, Ron Chesher, was acknowledged at a Club and public gathering on 30th August 2017 - wife Heather became the recipient of the first Distinguished Service Award made by the Club.

On 17th April 2018, it was announced that the rescue attempt on the Moruya River bar on 24th March last involving members Shaun Pike and Michael Weyman and members of other clubs, had been accorded SLSNSW ‘Rescue of the Month’ for March.

Life Member Bert Hunt stepped down from Presidency of the Australian Surf Rowers League on 4th July 2018, having been the inaugural president, then serving for 12 years.

The passing of a club legend, Ronald Clarence Chesher, aged 95, occurred on 16th October 2018 after a 70-year connection with the Club.

3 September 2022,  A black tie ball was held to celebrate the club's 90th year at the clubhouse

MORUYA OFFICE BEARERS OVER THE YEARS